Come visit us at www.rondentist.com

Come visit us at www.rondentist.com

My tooth is dark at the tip and it is worse since I whitened them!

My tooth is dark at the tip and it is worse since I whitened them!
Can I fix them?

A patient came in and asked me this today.
What I told her was that her teeth were not really dark that it was just at the tip of the tooth.  What she was actually seeing was the translucency of the tooth through the thinnest area of the tooth.  This is normal.  The enamel is translucent and where it is thin even more so.  In the thicker part of the tooth there is more dentin so the light does not go through as much.  That is why you see the mid tooth as white while the tip will be gray as you see the darkness of the mouth through it.  After you have whitened it may be more noticeable because the whiter tooth contrasts more with the grayness of the translucency.  I assured her it was quite normal and her teeth actually look very nice.  Is there anything that can be done?  Sure, you can have crowns or veneers placed but I though her teeth looked great and didn't need those drastic measures.
You decide: 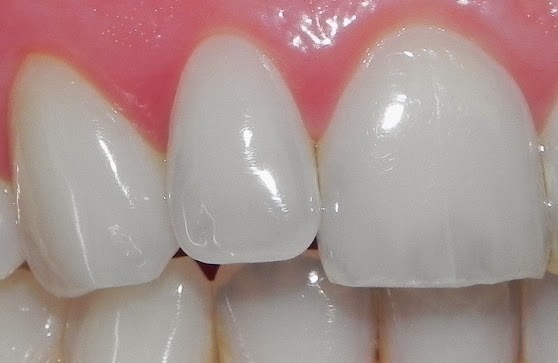 Posted by Dr. Ron Barzilay at 5:55 PM No comments:

WILL MY FILLINGS FALL OUT IF I FLOSS?

WILL MY FILLINGS FALL OUT IF I FLOSS?


That is a question that I recently received from a new patient.  He does not floss his teeth because he once had a filling fall out when he flossed.  He also informed me that he now has a loose filling and he doesn't want to floss because it could come out.
I reassured the patient that if a filling is loose it will come out!
It has nothing to do with the floss or whether the hygienist touched it during a cleaning.  If it is loose it is loose and it is going to fall out.  Better it should happen sooner then later so you can have it repaired as soon as possible.  The longer you wait with a loose filling in your mouth the more the tooth will decay under the filling and the greater damage done to the tooth.
To recap (no pun intended), a filling will not fall out because of flossing.  It will only fall out if there is an existing problem with the filling.

Posted by Dr. Ron Barzilay at 2:39 PM No comments:

My tooth hurts but my dentist isn't open until Monday. What can i do until then?

My tooth hurts but my dentist isn't open on the weekend.  What can i do?

Lucky for everyone that today there are many dentists who work on the weekend and you can usually find someone working on the weekend.  As a matter of fact, most dentists usually leave a number on their answering machines of someone who can help you out if you have a dental problem.  Having said that, of course there may be a time when you can't find anyone to help you so what do you do?

Here are a few suggestions.

2)  Pain revlievers.  Take your Tylenol or Advil or whatever pain reliever tends to work for you.  It may be enough to get you through till Monday.

3)  Tooth sensitive to hot and cold with a big hole.  I have seen temporary filling materials at pharmacies in the U.S. but not in Canada.  If you are in the U.S. you can try placing that in the hole.  In Canada just find something like ortho wax to close the hole.

4)  Throbbing tooth.  Look for some Orajel or any material for teething babies.  These materials usually have topical local anesthetics which may give you some temporary relief.

5)  Broken tooth that is really sharp.  Take a nail file and see if you can gently  file the rough edge before it tears apart you tongue.

These may help or may not help, just remember that these are suggestions that you may consider trying if you can't find a dentist.  Good luck and try to see someone on Monday.

Posted by Dr. Ron Barzilay at 8:44 PM No comments:

Do Root Canals harm your health? NO!!!

This past summer a young man came into my practice after hitting his front teeth in a car accident.  Two of the front teeth would require root canals as a result of the blows to them.  The third tooth had part of the crown fractured diagonally but at present did not require root canal treatment.  It would require a crown.
I referred this young man to an Endodontist (specialist in root canals) for this treatment.  Two weeks later this young man came into my office asking to speak to me.  He informed me that he had cancelled his appointment with the Endodontist and was inquiring about having his front teeth replaced with implants.
I asked him why he was considering this course of action?  He responded by telling me that he had read on the internet that root canals would harm his health.
Great, another internet Myth!
I told this young man that he had NOTHING to worry about when it comes to root canals.  That the treatment was safe and validated by years of real scientific study.   He was a little reluctant to tell me about what he had read.  On the other hand, he was not sure if he totally believed what he had read so he came to discuss what he should do regarding his teeth.
I again advised him that root canal treatment would be the best course of treatment in his mouth.  That I had a front tooth with a root canal in it since I was 9 years old.  That is 44 years since I had it done and no I don't suffer from arthritis, Lou Gehrig's disease or a host of other diseases that root canals are supposed to cause.  But of course this is just my own personal observation and not science.  The science, done by Doctors and Dentists and other researchers,  corroborate the safety of this procedure.  I further asked him why would he want to take out his natural teeth and replace them with implants.  Some of these articles say a root canal tooth is a dead tooth and therefore should come out.  Great, you are going to replace one dead part with another dead part - the implant.  In most of the articles you are told that root canal treatment is one of the most expensive treatments in dentistry and you know those greedy dentist are not telling you the truth because they just want to make more money.  Well, the truth is, to extract this fellows  teeth and replace them with implant supported crowns would end up costing him 4-5 times as much money.  Another myth busted, I guess we dentists actually do care more about our patients than the money!!
There is so much more that I could elaborate on what these people are saying but I am busy actually treating and caring for my patients.
Suffice to say that this young man did have the root canals done and he is fine.
To anyone reading this out there, please be careful of all the people out there on the internet who truly would put your health at risk through dissemination of lies and half truths in support of their own personal agendas.  Your Doctors and Dentists are professional who have truly dedicated their lives to improve the lives of others.  They are not the ones you should be afraid of.

All the best
Dr.Ron Barzilay
www.rondentist.com
Posted by Dr. Ron Barzilay at 12:24 AM 2 comments:

Is It Time for New Dentures Yet?

"Doctor, I had these dentures made 30 years ago, do you think it is time for new dentures?"
" I mean, they still feel pretty good!"


Well, my response to the patient is "let me have a look!"


My gut feeling tells me what I am going to find but never be so arrogant as to assume that you are correct without even investigating.


The patient takes out their denture and the biting surface is completely flat and worn down.  No wander their chin looks like it is approaching their nose, the teeth are so worn that the vertical dimension of their face has decreased.  When I look at the dentures the inside is full of plaque and food.  A signal that the denture is not fitting properly.  I put the dentures back into the mouth to see how much movement there is in the denture especially the upper and yes the denture moves all over her upper jaw.  Another sign the denture is not fitting properly.  I ask the patient to smile to check the aesthetics and you can hardly see the teeth as they are so worn down.


I address the patient, "yes Mrs. Jones, I think it is time for a new denture!"


New dentures every 5 years or so is a good rule of thumb.  You can go a little longer but they have to still fit well and not be worn on the surfaces.  Have your dentist advise you.

DO I NEED TOOTH WHITENING?

Do I need tooth whitening?
I have been asked this question so many times.  I can tell you that my answers have changed over the years.  First of all we have to ask some precursor questions.
What is white?  We look at someone's teeth and you see white, yellow and gray.  (Sometimes you also see black but this is usually due to decay so whitening won't help that problem.)  People have different shades of these colors in their teeth.  Some people have yellower teeth, some have grey teeth.  Children can have especially white teeth.  There really is no such thing as true white when it comes to your natural tooth.  It is made up of a combination of colors, brightness, intensities that give us the color of the tooth that we see.
The next question is what should the color of ones teeth be?  Well when we couldn't do anything about it, as you grew older, your teeth yellowed with the years.  Before whitening we would say to people that it looks natural for someone your age to have yellow teeth.  If they really objected to the color of their teeth then we would place porcelain crowns on all of their teeth.  Today, with whitening and so many people who have already whitened their teeth, we see more and more people of all ages with very white teeth.  As we have gotten used to this, a new norm has been created.
Taking all of this into account, my answer to the original question is No you do not need whitening.  Nothing will happen to you or your teeth if they are not white but if you want whitening I will be very happy to do it for you as more and more people today have whiter teeth.


All the best
Dr. Ron Barzilay


Having fun doing Dentistry in Hamilton Ontario
www.rondentist.com
Posted by Dr. Ron Barzilay at 11:35 AM No comments: